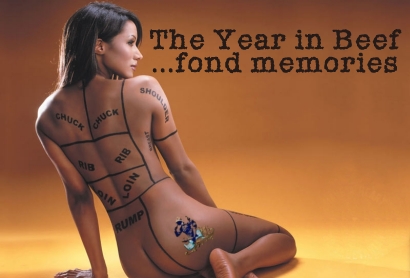 Supplies of any kind of Argentine beef are down.  Prices for beef ...from on-the-hoof to your supermercado ...are up.  Grass-fed, no-grain beef is disappearing rapidly while feedlot beef takes the day over and over again.

Why are the numbers of cattle dropping?  Answer: the irresistible pull and profit from soy.  Raising free-range cattle is not all that complicated, as you might imagine.  However, growing genetically modified soy is so simple that it is often referred to as "the farmer-less farm."  You spray, you plant, you spray again, you wait, you harvest ...then sell at historically high prices.  The local saying is, "most of the soya in Argentina is planted in Buenos Aires ...by telephone."  You can literally "phone it in" ...and reap big profits even when soy exports are taxed at 35%.

What´s a cattleman to do?  Switch to soy.  It´s a no-brainer.  The money is so big that you can´t say no to it.  It´s the "offer you can´t refuse" especially when an outside company offers to pay you in advance, in US dollars, to plow-up your pastures.  You don´t care if the crop fails ...you already got paid in hard cash ...but your pasture and your herd are gone.

For cattlemen who have resisted soy´s siren song ...there is a consolation prize: prices of live cattle continue to rise.  Within the last four years, cattle prices have quadrupled for the most sought after categories.

But those live-cattle prices are the same for both feedlot producers and the remaining traditional free-range ranchers.  As such, there really is no economic reason for grass-fed ranchers to continue.  2011 did not see the emergence of "boutique meat" or any sort of premium for ranchers who continue avoid feeding their cattle anything but grass.

My contacts in the meatpacking industry, however, inform me that there actually is a premium for what little grass-fed beef remaining in Argentina.  High-end steakhouses in Buenos Aires entice their suppliers to steer any obviously grass-fed beef to their restaurants.  In 2011, supplies of grass-fed beef even to those well-heeled establishments fell short.  For about a month this year, bife de lomo (filet mignon) of any kind was almost impossible to find anywhere.

The old saying from the commodity traders in Chicago is, "high prices cure high prices," meaning that if the price of beef is at an all-time high ...beef production will inevitably rise as investors enter that market in search of those high returns.  However, beef cattle has a natural cycle that is different from soy, corn, or household appliances.

Pastureland is economically easy to convert to grain production.  However, once converted to grain, it is a difficult proposition to revert to pasture.  A soy farmer, for example, would have to "give up an annual payday" harvest to wait for grass to return.  Even then, to populate his newly returned pasture with cattle is difficult because the price of live cattle is so very high now.  No one appears willing this year to give up a year´s soy profits in order to grow grass for cattle for which they will have to pay record prices ...then wait a year to send the calves to feed lots ...or the 3 years to fatten the cattle on grass.  Future free-range beef will no doubt come from those small and medium ranchers who have not given-up the method.  Expansion of beef production in Argentina doesn´t seem to be in the cards in the near term.

To add insult to the injury which the beef industry has felt this year, Argentines are turning away from their national dish due to its high price.  Argentines consumed a whopping 216 pounds of beef per person in 1958.  This year, the average may end up being about 100 pounds.  In 2011, beef consumption dropped 25% from the year before.  The title of "beef-eatingest nation" fell to Uruguay last year and remains so.

World-class beef in Argentina was as much of the national patrimony as cheap gasoline is for US citizens.  No one I know would have imagined either disappearing without a major expression of discontent.  As it has happened in 2011, Argentines have not complained in any notable fashion.  My opinion is that all the beef available outside the toniest restaurants ...just isn´t as satisfying as it used to be anyway.

Are exports sucking-up all the good stuff?  Not a chance.  I have not seen export figures for this year yet.  However, 2010's figures were the lowest in a decade.  Nothing has convinced me that the 2011 figures will not follow that trend.  We´ll see.

Once the PBR of a proud people, the reknowned Argentine beef (even feedlot beef) has become akin to champagne in 2011.

I'm moving to Buenos Aires next year and to be totally honest, easy access to grass-fed beef was a big draw. Is it easy enough to get? Are there a lot of vendors who sell grass-fed?

Git it while you can, Knoxy!

20% of the beef here still tastes like la del Abuelo ...but it is being directed to only the best steakhouses ...and they´re all pricey in local terms.

Anywhere in Puerto Madero is probably a safe bet for the remaining grass-fed beef.

Personally, I´ve been pointing folks to La Brigada in San Telmo. If you go, please lemme know if you are please with the steaks there. If you are not ...I´ll have to start recommending somewhere else.

Thanks, Maxy! But I´m not so sure that you have any more chance of getting grass-fed beef in the interior than in downtown Buenos Aires ...after all, there´s only two kinds of buyers at cattle auctions nowadays: feedlots and meatpackers. The meatpackers take most of their share to Capital ...and the feedlots turn it into grain-fed.

Our ranch in in the exact center of the Province of Buenos Aires ...tell me where to go to buy or eat grass-fed beef.

In the end there's a lot of an ideological conflict. A product treated as a first necessity tends to be commoditized. Grass fed beef is aggregate value beef. If you need to have "carne para todos", you are in an open conflict with the aggregate value beef concept, because asking for a product to be manufactured in the cheapest way possible will destroy any strategies of aggregating value, because that's costly.
And that's happening to the whole economy, loosing more expensive variants of every product, subsidizing the "popular versions".
The drive for improvement is in the extra amount you'll be able to charge for your product if the consumer perceives it as more valuable. The "x para todos" concept goes in the exact opposite direction. 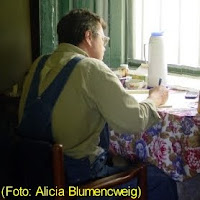 US émigré and cattle rancher in the pampas of the Argentine province of Buenos Aires since 2003. Founding Chairman of Democrats Abroad Argentina and Drinking Liberally Buenos Aires. Selected by the DNC to blog from the floor of the 2008 Democratic National Convention. Blog coverage subsequently chosen for permanent inclusion by the Library of Congress. He lives with his lovely wife Alicia and their pet monkey-rat at the ranch and in Buenos Aires City.